What is MACD indicator? How to use MACD indicator on IqOption?
Although simple, it is considered one of the most powerful momentum oscillators developed to this day. Its creator, Gerald Appel, introduced it the late 70’s.

How does IqOption MACD work?

MACD indicator is perfect for showing the optimal entry and exit points. It gives correlated signals at the start and the end of the trend.

Grasping the concept of MACD indicator may look harder than it really is, but it’s not that difficult after all. To make moving average convergence/divergence more understandable, let’s turn to EMA (exponential moving averages) with the periods of 12 and 26. 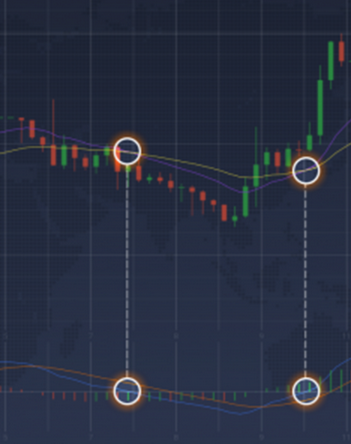 The MACD is an instrument based on the EMA lines By looking at the attached picture above you can notice the following things:

It is also noticeable that there are green and red bars following the length of the MACD lines.

The green and the red bars are showing the distance between the slow and the fast MACD lines. Green bars will appear in the MACD window when:

As you can see, following these bars is pretty simple once you know the concept behind them. You can also look at it this way: when the blue line moves up faster or moves down slower than the orange line, you will see green bars. Other way around, and there will be red bars displayed.

For use in day trading, all you need to do is find the “Indicators” icon in the bottom left corner of the window. A list with indicators will drop. Select MACD from this list.

Setting up the indicator – Step one

From here you can adjust the parameters how you prefer. If you wish to use MACD with default settings, just click “Apply”. 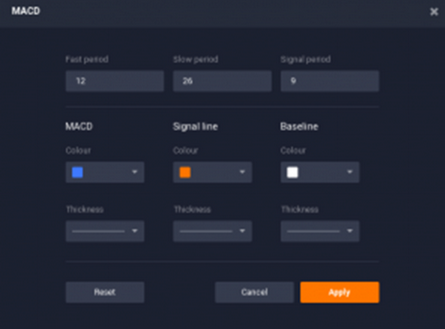 Setting up the indicator – Step two

The indicator’s sensitivity can be escalated by decreasing the fast period and increasing the slow one.

How to Use MACD in Day Trading?

MACD is applicable in multiple ways in day trading and we will go over them now.

When the blue line crosses over the orange line and continues going above it, usually an uptrend is about to follow. Fast line crosses under the slow line indicates, however, a downtrend. 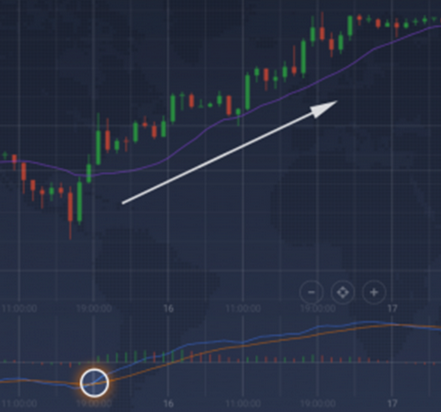 Signal line crossover as an indicator of the uptrend 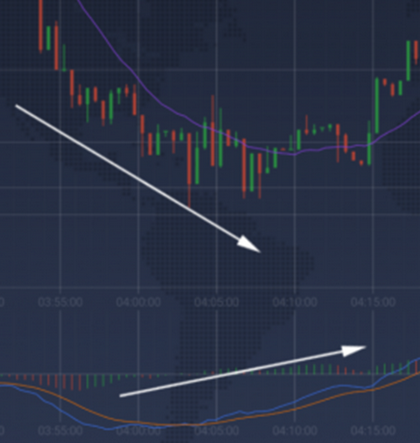 MACD indicator serves to follow the trend and indicate momentum at the same time. The thing that makes it a universal trading tool is that it can be applied to both short and long time intervals.

This is good indicator for trading

Good indicator for me. It gives accurate signals!

It says here that this indicator is universal, I do not think so, it is rather more aimed at tracking the trend

Sometimes the MACD starts moving in opposite directions, which means that there will be discrepancies in the indicators

MACD indicator i think great solution to help you on any trading platform around the world. I use this indicator some time during that trading for improve my trading skill and % of profir. So i hope it help someone else on IQOPTION platform also for trading.